You installed your robot in 2012- maybe even earlier. If you were in Pennsylvania, you were on the cutting edge of those making the leap to robotic milking. You probably felt some bumps along the way throughout the process, bumps that have long since been smoothed out. Maybe you have an A3 robot and only years later felt the jealousy of those able to purchase the A4. Either way, you’ve been at this game of robotic milking for quite some time. As is human nature, you have probably built a routine and created habits around your robotic milking schedules. Here are some friendly tips for you, my valued robotic dairyman, to challenge your way of thinking and to keep you up to date in your management.

If you’re an A4 owner, as soon as you finish reading this article- go clean your camera above the robot. I understand this chore is more tedious than others, (but hey, at least we’re not asking you to cover your trench twice a day every day), but it is so crucial. It’s so easy to justify it to yourself (trust me: been there, done that) and skip it, but this camera is what sees cows in the box. It’s the robot’s eyes! It’s also extremely susceptible to fly manure and cobwebs, making it hard to do its job. In a day and age where everyone is looking to modules, liners, shells, vacuum levels, you name it, in order to gain a few extra seconds milking, clean your camera and give your robot optimal conditions for attachment, saving both time and money.

Yes, maybe your single report with all cows on it, lactation days, lactation number, milk production, repro status, insemination date, milk speed, failures, expected dry off date etc., that was built seven years ago works great, but trust me when I say T4C has had updates that will make your life easier. Maybe you’re still writing your repro shots by hand on your calendar. Maybe you’re my personal favorite and are still writing everything in a notebook on your office desk. I once met a farmer who thought you could only get to the cow card page by looking under daily entry and scrolling through the lists of cows until he found the cow he was looking for. Push yourself in T4C, and more importantly, schedule visits with your FMS adviser! You don’t know what you don’t know. If you find a way to save yourself five minutes in a task that you do every day, that adds up to 30 hours saved in an entire year.

Okay, I admit it. Maybe this tip isn’t robot specific, but it is so important, and I see it go wrong on way too many farms. In all my travels, I can count on one hand the dairymen I have met that have clear SOPs for water cleanliness and actually follow them. I’ve heard FMS horror stories of troubleshooting farms and testing the water only to find the E. Coli levels in the troughs eight times the legal limit of public swimming pools. Again, in a day and age where everyone is looking for the cheap and easy fix to gain milk production, go clean your water troughs.

I once heard the best explanation for fetching fresh animals from a fellow FMS adviser at a training. He says the way he explains it is that,

“Mr./Mrs. Dairyman/woman, you’re going to have to bring this fresh heifer to the robot 40 times (random number) until she gets the hang of it. If you fetch her three times a day, you’ll spend two weeks on her. If you fetch her twice a day, you’re going to be spending additional time on her for three weeks. Bite the bullet, give your cows the time they deserve, and get them off to the best possible start.”

I love that explanation. Lely has seen so much data that shows animals who start milking at the robot three times a day do much better than those who only get milked twice. Find the time. Make it happen.

Is the robot technology perfect? No. Have there been bad days, and will there be more to come? Absolutely. (Yes, I can hear your chuckle from here). Let’s not forget that the days of milking in a parlor or a tie stall two or three times a day are likely a distant memory. Let’s not take for granted the increase in pregnancy rates and being able to see who is in heat at the click of a button. Let’s remember the family gatherings we get to attend at 6:00pm at night, instead of at 9:00pm. I admire you, Mr./Mrs. Dairyman/woman, if you’re frustrated with two failures per day and a 7.5 milk speed, and I’ll support you to the best of my abilities, but let’s remember the technology we get to use every day and realize that there are much worse problems to have. 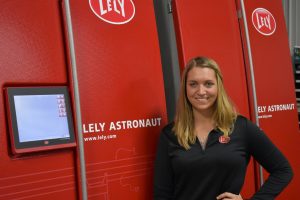